Older versions or Spigot servers, will have less features and different commands. If you're using an older version or Spigot, please do your own research as the commands will be different.

A Quest in NotQuests can have different properties. Examples:

Additionally, we can attach the following to a Quest:

There are two types of commands:

In NotQuests, we create all our Quests with commands. No need to edit complicated configuration files!

Each thing you write, separated by a space, is called an argument. In the following pictures, edit, and questname are the two arguments: 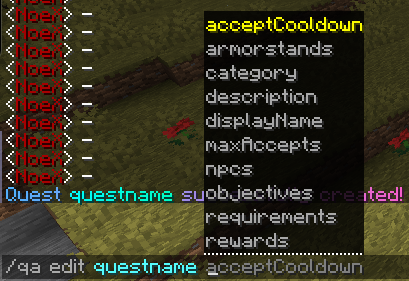 If you press space after the last argument, our intelligent command system will show you what argument comes "next". If you're stuck with a command, just make sure the last character is a space and read the command completions!

If the command completions aren't enough and you still don't know how a command works, just press enter and run the command! It will show you a help menu. Just read it, and it will tell you what arguments it needs and what they do.

I think the best and easiest way to learn, is to learn-by-doing! So let's not waste time on boring documentations and create our first Quest:

It should then show you the following message:

Now, the initial Quest Name cannot have any spaces. It's just an identifier for the Quest. However, we can give it a display name which can have spaces - and that's the name the player will actually see!

Next, we want to add a description to the Quest, which will be displayed in multiple places, for example if the player tries to preview or take the Quest:

/qa edit TheVirus description set A deadly virus has infected the people of Winterfell. You have to murder the infected villagers to prevent the virus from spreading further.

Now, your players will see a beautiful description and display name after accepting the Quest:

Without any requirements, every single player will be able to accept your Quest. However, that Quest we're gonna make will be quite tricky! Let's require the player to have at least 10 Quest Points until they can accept the Quest:

Quest Points can be earned by completing Quests, or they can be given out manually.

This is what Players will now see if they try to accept the Quest but don't fulfill the requirements.

In order for us to be able to test our own Quest, give yourself 10 Quest Points:

Thank you for your attention

If you like NotQuests, please give NotQuests a follow on modrinth 😊 This will motivate me bring you more updates and features!

Objectives are the heart of every Quest. Let's add our first one!

First, the player has to free up the road from all the shit the infected Zombies made:

This objective will be completed once the player breaks 64 dirt 👍 If you want to, you can specify multiple materials there. For example, if both dirt or stone is fine for the player to break, just enter dirt,stone there.

Now, let's add a description for that objective:

That was easy, wasn't it?

Onto our next objective! The street is clear! The player should now kill all the infected villagers:

After 15 kills of Zombie Villagers, that objective will be completed! Now let's add an objective description and name:

/qa edit TheVirus objectives edit 2 description set You can see the infected villagers in front of you! Murder them all to stop the virus from spreading!

Now, after accepting this Quest, you will see this:

As you see, both objectives are visible. You can also complete them in no particular order.

However, we want the second Objective, "Zombies ahead!" to only be visible and complete-able after the first Objective is completed.

To accomplish that, we need to add a condition to the second objective which makes it so the player needs to complete objective 1 first. There's two ways to achieve this in NotQuests (choose just one):

Done! If we take the Quest now, the second objective is hidden:

It will be unlocked once you complete the first objective 😀

With Triggers, we can add some action to the Quest!

Let's make NotQuests spawn some Zombie Villagers for him once he reaches the second objective.

First, we need to create the action which spawns the zombie villagers. Actions can be created outside of Quests and re-used for every quest. Let's make a SpawnMob Action:

Now, let's add the trigger with this action to our Quest:

This runs the action "Spawn15ZombieVillagers" once we BEGIN O2 (objective 2) in ALL worlds (not limited to any world). Feel free to test it out — it will work 👍

Your players will murder you if they waste their time on this super hard Quest without receiving any rewards. So let's add some:

Once you complete the Quest, you will receive the rewards, but the player won't notice. That's because rewards are hidden (can be changed in the config) by default unless you give them a display name! So let's do that:

Done! Once you finish the Quest, you will see the rewards:

First, let's make it, so they can only accept it once every 20 hours:

20h = 20 hours. Now, let's give it a hard limit of 10 Quest completions. After 10 completions, the player cannot accept the Quest anymore, no matter how long they wait:

This will make it, so the player cannot take the Quest using the /q take TheVirus command. Instead, they have to take it by either right-clicking a Quest Giver NPC or a Quest Giver armor stand. More regarding that in the next section:

Files for the finished TheVirus Quest (if you want them for some reason. They are not needed):

Colors are supported basically everywhere in notquests - but not the legacy ones you used to know. Stuff like &6 or &c won't bring you far - it has long been abandoned by Mojang & kept alive by Spigot - as NotQuests thrives to be as modern and innovating as possible, it abandoned those too.

Instead, we are now using MiniMessage, which allows you to do even more advanced stuff easier, like RGB colors, gradients, and even click commands & hover messages! You can find the MiniMessage docs here.

Let's start by giving our quest a colorful display name:

Pretty cool, right? You even have auto-completions for all MiniMessage color tags for many commands. At the same time, NotQuests has added some internal colors which you can use to achieve a consistent look. For example <highlight>, <highlight2> or <main>. Those can be customize inside of the config, to change NotQuests entire color scheme.

You can group Quests together in categories. Categories are just a way to organize your Quests. Let's create a category called "Virus Quests":

Now let's move our quest to that category (by default, it's in a category called "default").

Done - that easy! Each Quest can only belong to one single category. Categories also determine the folder structure of NotQuests - and they'll even determine how it's displayed in the GUI!

Each category can also have sub-categories. There can be unlimited sub-categories, and you can nest them how deep you want. Example of creating a category "Zombies" as a sub-category of "VirusQuests": /qa categories create VirusQuests.Zombies

The name we specified above is also just the categorie's identifier. You can add a display name (which is what the player will actually see). It can contain spaces, or even color codes, just like quest names! Example:

(todo, still need to write this up. Works like the predefined progress order for quests > objectives, but for category > quests. Super useful, this can make your life VERY easy and speed things up by a lot)

Now, start making Quests! On this website, you can find further information about NotQuests and help if you check out the Documentation tab on the top of this page. If you need any help, feel free to join our Discord.